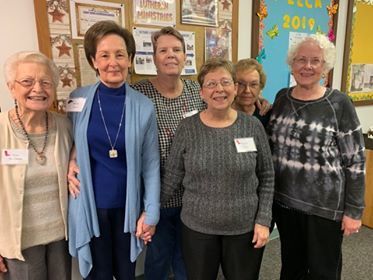 First Lutheran Church Women hold a monthly Circle meeting and handle many service projects on behalf of the church.

FLCW's Ruth Circle meets the 3rd Tuesday of every month at 9:30am.

As a community of women created in the image of God, called to discipleship in Jesus Christ and empowered by the Holy Spirit, we commit ourselves to grow in faith, affirm our gifts, support one another in our callings, engage in ministry and action, and promote healing and wholeness in the church, the society, and the world.

Projects
Lutheran World Relief
A long-term project of the FLCW.

Lutheran World Relief (LWR) is an ELCA church-wide campaign to promote projects that help children and adults in impoverished countries all over the world. LWR accepts donated supplies for projects including mission quilts, personal care kits, school kits, fabric kits, and cash donations. Each project is assembled locally and then mailed to Lutheran World Relief Centers worldwide. From there, the projects are sent to the countries in need.

History
Excepts from the 1988 "First Cooks" Cookbook published by the FLCW.

“On March 18, 1884, a small group met and organized the Skandinaviske Evangeliske Lutherske Ebenezer Menighed. Eng. (Scandinavian Evangelical Lutheran Ebenezer Congregation). A small frame church with picket fence was built at North 10th and Jefferson in the outskirts of Waco and dedicated in October 1884… Our women have been active from the beginning.

… In 1892 the Kvindeforening (Ladies' Gathering) was organized and elected.

… In 1917 the small frame church was sold and moved. A Gothic-style brick building with basement was dedicated in November 1917 in the same location. [Women sold meals and items to raise money for the Building fund.]

… The Depression came in the 30's and more dinners helped to pay for many things, sometimes the Pastor's Salary. The women had box suppers, ice cream socials, and lemonade squeezes.

… In 1950 the women were given the right to vote in church business meetings.

… For over a hundred years the women have been faithful. Now, as in the past, we serve our Lord in word and deed. ... Most importantly, we worship and carry God’s message of love with us into every profession in Waco and beyond.

… As we continue our journey of faith as Women of the Evangelical Lutheran Church in America, we remember our past and look forward to the challenges and opportunities of our future together.